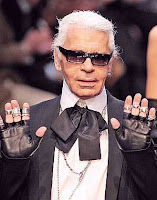 Everybody freak out!!! Karl Lagerfeld did not renew his contract with Chanel according to a solid rumor. There goes my dream of moving to France, joining Chanel and being mentored by, you guessed it, another one of my favorite designers.
Apparently, Lanvin's Alber Elbaz would take his place. In turn ex-Nina Ricci designer Olivier Theyskens would replace Alber. The designer musical chairs is still only a rumor but keep your fingers crossed anyway. 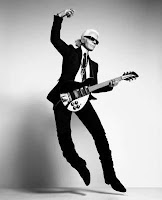 We know that you are an icon and can basically do whatever you want from this point on but, we beg you, Karl: please don't go. (in French below just in case...)
Nous savons que tu es une vedette and que tu peux, en fait, faire tout ce que tu veux à partir de maintenant, mais nous t'en supplions Karl: s"il te plait, ne t'en va pas. (French)
If in the end this rumor turns out to be rubbish, we'll be happy. But for the record, to whomever started this rumor: you are NOT funny!
at Friday, June 05, 2009