That Canadian Chick!
Segment: event
Project Runway Canada: the Bold, the Young and the Victorious
As the event slowly was an hour away from coming to an end, all took their places for the grand finale that would showcase the work of the three finalists of Project Runway Canada. The winner, who was announced on the show weeks ago, is none other than Sunny Fong, who is a MASTERFUL designer with an amazing vision and skills to match. We were first treated to a surprising show by PRC's mentor to the designers, Brian Bailey. The excitement, however, elevated when Jason Meyer, one of the three finalists, took the stage with his shiny and shimmery collection. Not being a fan of his on the show, I demonstrated lukewarm feelings towards his set.
"I didn't like him on the show. He got on my nerves!" I declared to Wil, prompting him to laugh at my do-or-die attitude. 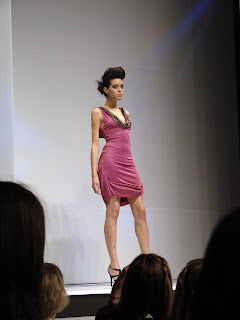 My demeanour, however, quickly changed upon seeing finalist Jessica Biffi's name scrawled across the catwalk's backdrop. I swayed my head to the beat as the models came down the runway in what Jessica herself had dubbed her fashion take on "ghetto fabulousness". As they announced her name, I think my shouts became similar to those of a lunatic stuck in a coo-coo's nest. 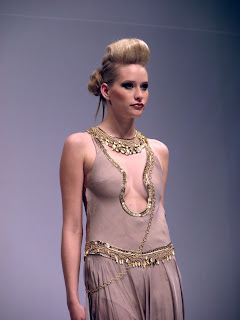 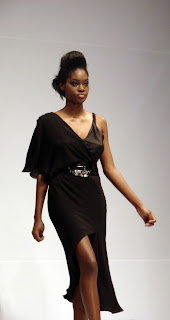 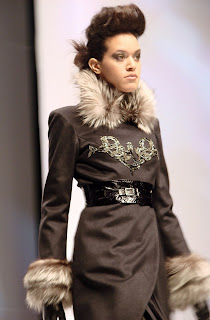 No moment was more beautiful than Sunny Fong's. As the victorious winner of the second season of PRC, Fong showed its public why he divided and conquered like Alexander the Great, the inspiration behind his line: the man's couture prowess is unparalleled in every element, piece and concept. It showed impeccable detailing and made me shiver as each model came down the runway, sashaying like soldiers on a mission. I was drooling at the mouth for every item and prayed that I would someday be able to afford a few key pieces, for I can tell you, Mr. Fong will surely reach Gucci status. You heard it here first, folks! I was humbled by his shy wave to the crowd as he walked down the runway with his model and cheers exploded louder than at a rap concert.
Ce n'est qu'un au revoir...until next year! 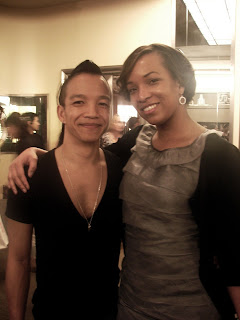 Exhausted from my walking around all day in my 3 ½ inch heels, I pleaded with Wil for us to go home and take it easy, but not before taking a picture with my two favourite contestants from PRC. Jessica was as sweet as pie and I went in for the kill with a hug that was good enough for a nation. As for Sunny, I could only muster the words "Congratulations on winning. Your work is beautiful!" for which he thanked me warmly before posing with his one hundredth thousand fan. As for Jason, well...I will not go there.
What transpired at this event is the enthusiasm for fashion and beauty that resonates with this growing industry and the way the public embraces it. As we were leaving the building, I looked over at my sweet man, who looked back at me with a smile.
That round room was nice, huh? Would you love having the wedding reception there?" we both asked each other, obviously on the same page in fashion...and in love.
CN
at Monday, May 11, 2009