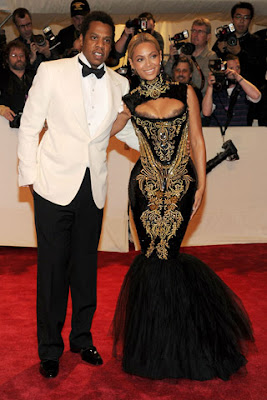 The stars were out in full garb for the Metropolitan Museum Costume Institute Gala. The yearly event was paying homage to the late British designer, Alexander McQueen. Icons such as Sarah Jessica Parker, Madonna, and Naomi Campbell came out for the unveiling of Alexander McQueen: Savage Grace. [STYLE]
Lea Michelle, Glee star wore a black and white Versace dress to the show's Academy Screening in Hollywood. [THE CUT]
A little feel good shopping: Gucci's Mother's day tote Benefits UNICEF'S HIV/AIDS charities. [RACKED]
Gisele Bündchen made 45 million dollars over the last 12 month which is more then twice as much as the second highest earning model in the world, Heidi Klum. [FORBES]
at Thursday, May 05, 2011