We found this interview on The Cut and we just HAD TO SHARE!!!
Alber Elbaz on Thin Models, Bloggers, and Celebrity Fashion Lines 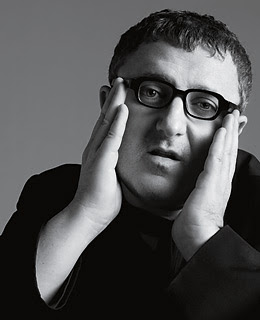 Lanvin designer Alber Elbaz refutes the rumors that have popped up a couple times that he will replace Karl Lagerfeld at Chanel. "It didn’t happen. It’s not happening," he tells Dirk Standen in the sixth installment of Style.com's "Future of Fashion" series, in which fashion people grapple with the Internet and online technologies. Some highlights from Elbaz's sprawling interview:
He doesn't think designers should be blamed for thin models.
We are being accused that some models are anorexic, but we as fashion designers cannot be blamed, because you know, when I talk to women around the world, rich and poor and young and old and intellectual and not, what they want to be is skinny. You ask them, what is your dream? It’s to be skinny. That’s all they want ... Me, as a designer that is not exactly skinny, all I want is comfortable clothes. All I want is beautiful. I mean, I like gray hair, I love wrinkles. But this is me.
He loves bloggers, but as a flawed species.
I have to tell you, I love bloggers. And I’m not telling you that because I’m [trying to] bribe them. Every morning I wake up and I see the blogs. There is something very innocent. There is something very honest. You can say, OK, they didn’t have the experience of seeing things. But again it’s another medium. That’s their opinion and it’s interesting to see how politically incorrect they are. Of course, when they say, “Oh my God, I love it,” I’m extremely happy. And when they say, “Oh my God, it’s a piece of shit,” I hate it.
When his partner told him Lanvin was "never cool," Elbaz replied:
I prefer being relevant to being cool, because if you’re cool, you’re also cold the next day. So it’s more about being relevant. The one thing that always scares me is to be like the Miss America of the moment, because next year there is a new Miss America.
He's offended by celebrity fashion lines.
I feel that some celebrities think that because they are famous, they can do fashion. Imagine if I want to be now a dancer. Trust me, I can’t. I can’t jump. I can’t even limp from one point to another. I feel that there is this kind of confusion.
He cares about his employees.
We have to produce in order to have a salary for the people who work for us. This is the pressure I feel season after season when I sketch. When I have this one week I take to sketch, I sit in my apartment and I try to sketch, and all I think about is the people that are working there, that I have to do a good job in order for them to have a salary. And that’s a huge pressure, season after season.
He cares about what women buy.
I check the sales every morning, every morning, every morning. It’s not that I work on commission and I want to see how much I’m going to get tonight. It’s not about that. But I need to know if I’m doing something right.
He doesn't like knockoffs, but feels conflicted.
And sometimes I have to tell you that I sit and work in the studio days and nights and weekends on an idea, and then a week or a month or two months after the show I see it everywhere, and I don’t know if I have to be happy about it or sad. I guess I decided not to look and wear, like, thick sunglasses in purple and red, so when people ask me, did you see, I say I don’t speak English. By: Amy Odell
at Wednesday, May 19, 2010