From May 7th to August 1st, 2010 the Brooklyn Museum of Art is presenting an exhibition of some of its most renowned costume pieces. American High Style: Fashioning a National Collection showcases some of the work of the first generation of female designers such as Bonnie Cashin, Elizabeth Hawes, and Claire McCardell along with several European designers who greatly influenced American Fashion notably Charles Frederick Worth, Elsa Schiaparelli, Jeanne Lanvin, Jeanne Paquin, Madelaine Vionnet and Christian Dior. The partnership between the Brooklyn Museum of Art and the Metropolitan Museum of Art is one not to be missed. Here is a sneak peak : 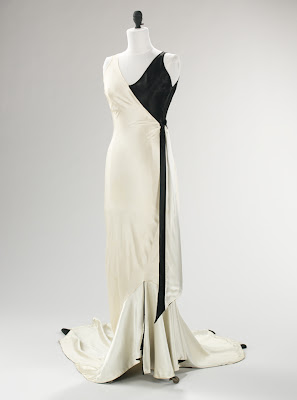 Jessie Franklin Turner (American, 1881–circa 1956). Evening Ensemble, circa 1930. Black-and-white silk slipper satin. Brooklyn Museum Costume Collection at The Metropolitan Museum of Art, Gift of the Brooklyn Museum, 2009; Gift of the estate of Mary Boocock Leavitt, 1974 (2009.300.511a–c)
This luxurious slipper-satin ensemble, which epitomizes the look and drama of 1930s evening wear, is distinguished by the unlikely pairing of glamour and versatility. The ensemble includes two long-sleeved over pieces, each of which is worn over the dress bodice to modify the silhouette and amount of skin exposure. Jessie Franklin Turner’s early relationship with the Brooklyn Museum is documented to 1923, when she designed dresses using fabric inspired by African textile patterns shown at the Museum. 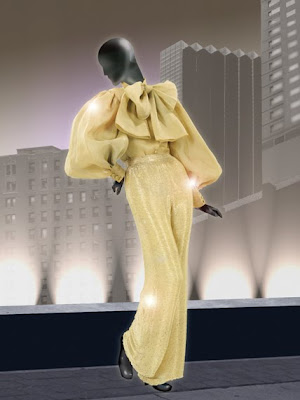 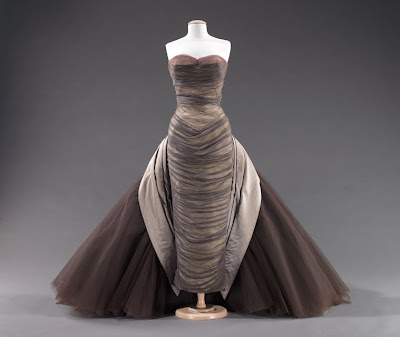 Charles James (American, born England, 1906–1978). "Butterfly" Dress, 1955. Smoke gray silk chiffon; pale gray silk satin; aubergine, lavender, and oyster white tulle. Brooklyn Museum Costume Collection at The Metropolitan Museum of Art, Gift of the Brooklyn Museum, 2009; Gift of Mrs. John de Menil, 1957 (2009.300.816)
This design invites multiple interpretations. The form alludes to the extreme bustles of the 1880s and at the same time can be imagined as a transformation of the female body into that of a butterfly with iridescent wings that shimmer when they move. References to the past aside, it was a form hitherto unknown in the history of fashion. Twenty-five yards of tulle were used in its making. 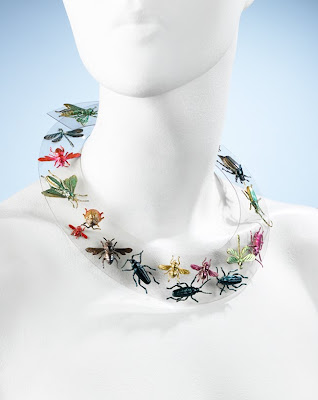 Elsa Schiaparelli (French, born Italy, 1890–1973). Necklace, autumn 1938. Clear Rhodoid (cellulose acetate plastic); metallic green, red, pink, blue, and yellow painted pressed metal ornaments. Brooklyn Museum Costume Collection at The Metropolitan Museum of Art, Gift of the Brooklyn Museum, 2009; Gift of Arturo and Paul Peralta Ramos, 1955 (2009.300.1234)
Rhodoid was a newly developed material that suited Elsa Schiaparelli’s design intent for this, perhaps her most macabre and certainly one of her most iconic designs. The transparent foundation creates the illusion that the insects are crawling directly on the skin of the wearer’s neck. Yet Schiaparelli was never too heavy-handed: her choice of brightly colored, toy-like ornaments tempers the repugnant effect. Love, Kelie
at Monday, May 10, 2010