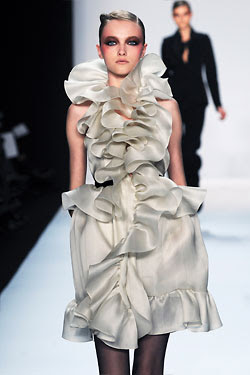 After filing for bankruptcy and shuttering about a year ago, Bill Blass is finally readying for a comeback that will hopefully beat the one Christina Aguilera attempted. Peacock Holdings bought the label for $10 million in late December of last year. Now the rumor is that Jeffrey Monteiro will be appointed head designer of the women's collection. Monteiro moved to New York from Australia to design for Mayle. He later was design director at Derek Lam, and launched his own collection in the fall. Peacock says they'll reveal a new designer in a few weeks. Maybe we'll see them on the runway soon. [WWD] [THE CUT]
at Friday, November 13, 2009