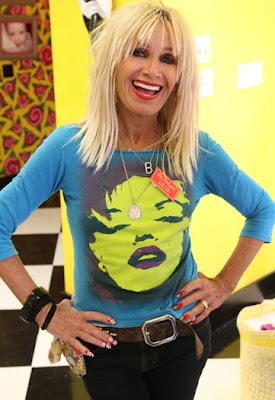 Betsey Johnson is a fashion designer with stamina and a name that evokes smiles everywhere. Since the 1960s, she has been deemed the “party girl” and even helped set New York City on fire alongside Edie Sedgwick and Andy Warhol.

In 2002, after removing a saline implant, she noticed a lump and was later diagnosed with breast cancer. Soon after she under went a lumpectomy and radiation treatment, thankfully she has been cancer free ever since and has been using her presence in the fashion industry to raise awareness about the life threatening disease. Some of her personal endeavors include, but are not limited to being the honorary chairperson for the Fashion Targets Breast Cancer Initiative. Johnson makes public appearances, participates in numerous fundraising events, and regularly creates one-of-a-kind items to be auctioned off to raise money for breast cancer research and awareness. This year a specially designed pair of gloves are available for sale on her website.

According to the Susan G. Komen Breast Cancer Foundation, about 207,000 women and 2,000 men will be diagnosed with breast cancer this year. Betsey Johnson beat breast cancer and now makes it her mission to help others to do so. Do yourself a favor this October as well as anyone you know who has a “rack” and put a wrap on breast cancer by checking for lumps. If you feel anything the least bit irregular, call your doctor and schedule an appointment today.