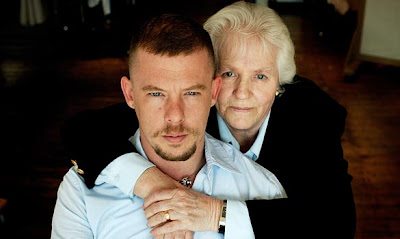 The entire fashion community is in shock. We've lost one of fashion's greatest creative minds. Alexander McQueen was found dead in his London home this Thursday. It seems like the London based designer committed suicide, this only a few weeks after his mother's death (February 2, 2010).
This happened in one of the fashion industry's busiest times. His MCQ line which was scheduled to show in this week's New York Fashion Week had to be canceled. The 40 year old man was also supposed to present his always highly anticipated Autumn/Winter women's wear collection in Paris next month. But in McQueen's own twitter words: "life must go on!!!! " But it will be hard to replace you Alex. You will be missed. Hope you finally found peace. Love, Kelie
at Friday, February 12, 2010